At Usinger's, Some Things Never Change

The Usinger Family has been making sausage in Milwaukee, Wisconsin for over 130 years. Usinger's is a one of a kind, nationally recognized family business devoted to the craft of sausage making. Feinschmeckers (gourmets) will discover over 70 varieties of old world sausage. From a better bratwurst to an authentic beerwurst, superior European-style wurst doesn't get any better than Usinger's ... producing quality sausage products and providing excellence in customer service since 1880.

Usinger wurstmachers are still located on Milwaukee's Old World Third Street, the site of the original store, where they adhere strictly to the original family recipes. Unchanged since 1880, these recipes are never altered in order to meet a competitive price. To the Usinger sausage makers, it is a matter of pride to maintain their tradition of excellence. Even among members of the meat industry, the superlative quality of Usinger's Sausage is recognized. 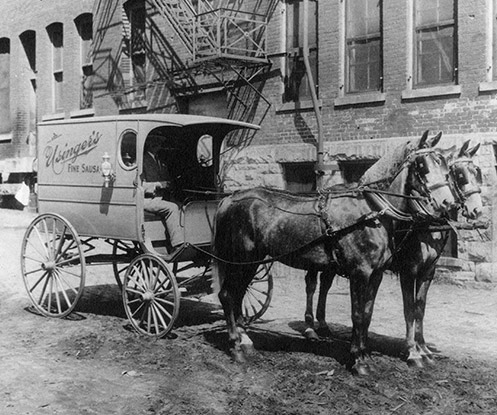 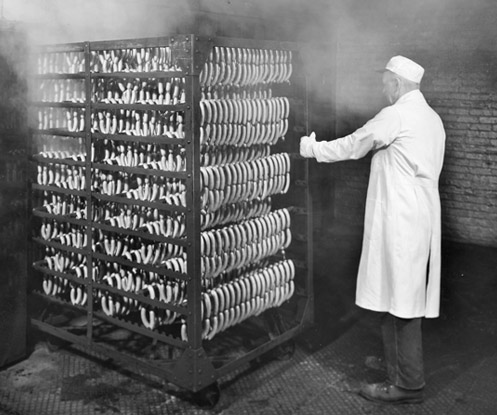 Inside Usinger's factory, the tradition and family heritage the business is built upon still remains. The factory has modern luxuries and technology of today, but the original ovens and recipes still remain. Any modern equipment was approved only if it did not change the taste of the sausage. Fritz Usinger, Usinger's President, carefully oversees production of the hand-made specialties, from the initial stages, through smoking, packing and shipping.

Historical photographs and relics decorate the staircases, the store, and even the factory itself. The Usinger elves have been making the sausage since the 1880s. You may never see them, but you definitely feel their presence when you visit the store and taste all of the old-fashioned goodness.

The Usinger's story began in Wehen, Germany where young Fred Usinger, an apprentice sausage maker, learned from the best wurstmachers. He came to Milwaukee in the late 1870's with a pocketful of recipes, $400 in cash and his favorite sausage recipes, which he had learned as an apprentice "wurstmacher" (sausage maker) in Frankfurt. He had ambition, dreams of a better life and the willingness to work hard for it. He went to work for Mrs. Julia Gaertner, a widow who operated a small butcher shop on Third Street. Within a year or so, Usinger had bought out Mrs. Gaertner, married her niece Louise and moved into living quarters above the store.

The young couple worked sixteen to eighteen hours a day making and selling their sausage. Their best customers were saloonkeepers whose trade depended on the quality of their free lunches. As long as their customers relished Usinger's sausages, the saloons paid Usinger's premium price.

At the turn of the century, Milwaukee's German aristocracy did their shopping on Third Street, and the store soon became a popular stop. Before long, the Usinger's were shipping sausage as far away as New York. While business became so good that more help was needed, Fred Usinger kept the growth under control, so he could oversee each step of the sausage making process.

The Usinger's Milwaukee business grew, and before long, they were shipping their famous sausage across country. Regulation of sausage manufacturers and interstate shipping was in its infancy, and Fred believed those regulations where necessary to protect the industry and consumers. Usinger's was one of the first Wisconsin sausage companies to seek and be granted Federal Inspection.

The Legacy Lives On: Following the death of company founder Fred Usinger in 1930, his son Fred Jr., oversaw the family business. It was a difficult time – the country was immersed in depression and then war. During this period, Usinger's Sausage became one of the earliest members of the Better Business Bureau, and is still a member today.

Fredrick Usinger III took over leadership of the company in 1953 and remained at the helm well into the ‘90's. In 1983, he expanded Usingers' Third Street plant with an addition built on an adjacent vacant parcel once home to the Metropolitan Building. It was the genial Fredrick who introduced the elves to the world, and gave Usinger's its current identity. 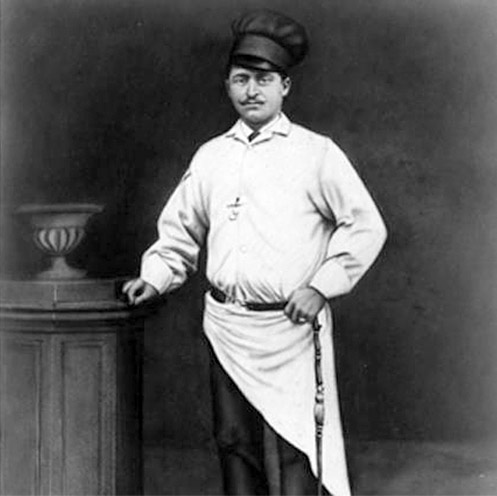 In the Last 25 Years

Committed to the city that has always been home, in 1994 Usinger's opened a distribution center in Milwaukee's Walker's Point neighborhood. It was during this time of expansion in the 90's that fourth generation siblings Fritz and Debra Usinger assumed control of the day-to-day operations. With an eye on the future, and a respect for the past, Fritz and Debra embraced the opportunity.

In 1995, Usinger's began using Certified Angus Beef for some of its products. In 2000, Certified Angus Beef was chosen as an official supplier of the 2002 Winter Olympic Games to be held in Salt Lake City, Utah. Usinger's then sent its Certified Angus Beef hot dogs into competition to be the official Olympic wiener. The director of food services for the games declared he and his committee had searched to find the "best hotdog in the U.S.," and that turned out to be the Usinger's product. As a preview, Usinger's sent 20,000 hot dogs to the Summer Olympics in Sydney, Australia, in 2000. For the 17-day Winter Games, Usinger's sent 500,000 hot dogs. All the hot dogs were eaten in the first five days! Olympic spectators were maligned for their greed, and it seemed even the athletes had consumed more than their share of Usinger's hot dogs. We welcomed the publicity, and shipped out another 200,000 hot dogs within a week.

In 2004, Usinger's moved a portion of the production to a new facility next to its Walker's Point distribution center. However, the heart and soul of Usinger's will always be the original store on Old World 3rd Street, where Fred Usinger formed the company's humble beginning so long ago.

In July of 2012, Debra Usinger lost her battle with cancer and the company is now in Fritz's care.

The history of the company, which spans more than a century, shows that there has always been a Usinger to guide it. Today, fourth generation Usingers lead the firm confidently into the future, ever-mindful of their heritage of quality, which must be maintained. For the Usinger family and company employees, “America's Finest Sausage” is more then a slogan … it's an ideal … a pledge that they will continue to make only the very best for their customers. 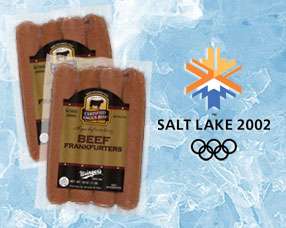